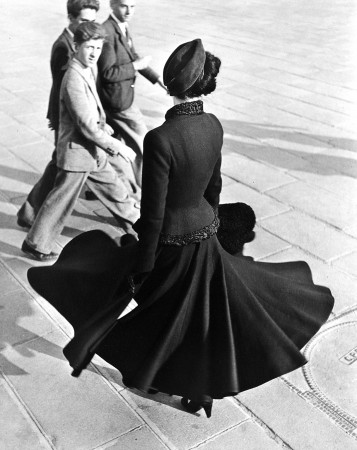 The Inspiration behind 1947 Bespoke

Our label takes inspiration from one of the most unforgettable and enduring moments in fashion: the legendary “New Look” of 1947 which represented a pivotal shift in how women dress. After the seemingly endless misery of war and wartime fabric rationing, Dior’s 1947 debut collection, with its metres of swathed material, tiny wasp waists and voluminous longer-line skirts, was a total revolution. British Vogue put it like this ‘There are moments when fashion changes fundamentally. This is one of those moments.’ The Dior silhouette was dubbed the ‘New Look’ (although it was officially called Corolle) by then editor of US Harper’s Bazaar, Carmel Snow, who congratulated Dior calling it a show that “changes everything”.

In fact, hard as it is to imagine, the look was so revolutionary that it triggered riots in the street: during a photoshoot in Paris, models were attacked by street vendors furious at what they considered the designer’s excessive use of fabric. When in Chicago later that year, Dior was met by women holding placards that read, ‘Mr Dior, we abhor, dresses to the floor’.

Dior himself remained unfazed, he was attempting to restore a sense of romance and feminist to French couture. “We were leaving a period of war, of uniforms, of soldier women with shoulders like boxers. I turned them into flowers, with soft shoulders, blooming bosoms, waists as slim as vine stems and skirts opening up like flowers”. Richard Avedon’s photograph from this time captured this new found spirit of optimism and the House of Dior quickly became the most powerful couture house in the world.